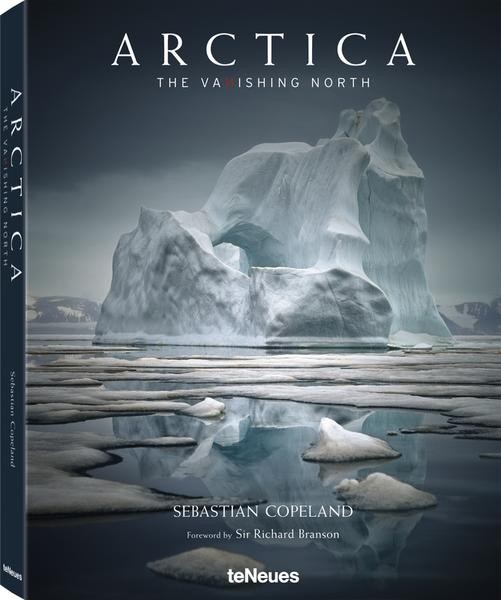 Do you have any questions concerning this product?
Description Neues 1
Description
There are only a few landscapes in the world to show the untamed nature but surely the artica... more
Close menu
Product information "Sebastian Copeland "Arctica. The Vanishing North Collector's Edition""

There are only a few landscapes in the world to show the untamed nature but surely the artica is one of them.
The rare motive is impressive but also this global treasure is in danger.
Copeland’s aim is to create a homage to the nature’s masterpiece and at the same time to create awareness towards the threatening development.

Copeland himself has interesets which are different: he is an award-winning photographer, a journalist, an author, a polar researcher and passionate lover of the environment.
He honors this lonely place on our planet and wants to remind of ist untamed nature and authentic beauty – the dangerous situation should be an alarm call to the countries located on southern latitude.

This book shows his passion for this theme in a way no other photographer could have done it.
The first impression oft he pictures might be poetic but the message is pragmatic; he wants the society to open their eyes and provide sustainablity for the nature.

Sebastian Copeland *April 3, 1964, France Sebastian Copeland is a photographer, explorer, and environmental advocate. Noted as a photographer “who has produced works that are of outstanding artistic merit and communicates messages of urgent global significance,” Copeland’s first book on Antarctica earned him the Professional Photographer of the Year from the 2007 International Photography Awards. He has also produced documentary films chronicling his North Pole and Greenland crossings. His latest book Arctica: The Vanishing North (teNeues 2015) won the ITB Award 2016 and covers ten years of photographic exploration of the far North. Copeland was named Professional Photographer of the Year by the 2016 Int’l Tokyo Photo Awards. Copeland has led expeditions across the Arctic sea, Greenland and Antarctica, and has reached both poles on foot—North and South. With over 8,000 kilometers under his skis, Copeland holds various records and polar “firsts” across the polar region. In 2017, Copeland was named one of the world’s 25 greatest adventurers of the last 25 years. An international speaker on the climate crisis for more than a decade, Copeland has addressed audiences at the United Nations, at universities, and museums worldwide, and many Fortune 500 companies warning of the systemic transformations taking place in the polar regions from anthropogenic activities, and their geopolitical consequences. Copeland is a member of the Explorers Club. He sits on the board of directors of President Gorbachev’s Global Green USA.        ... mehr