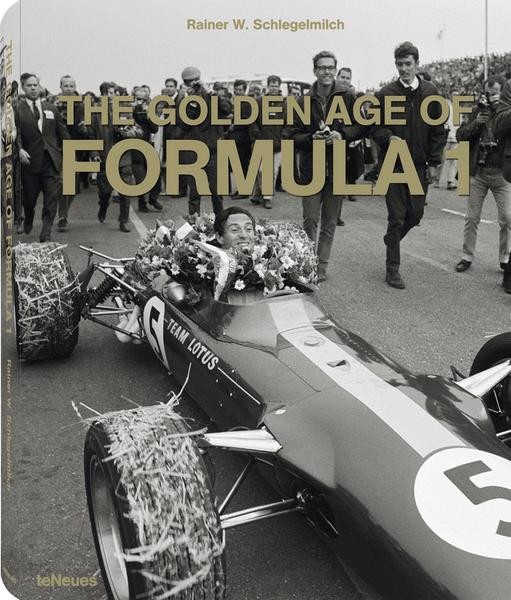 Do you have any questions concerning this product?
Description Neues 2
Description
Few spectator sports generate such excitement as Formula 1. The name refers to the most... more
Close menu
Product information "Rainer Schlegelmilch &quot;The Golden Age of Formula 1&quot;"

Few spectator sports generate such excitement as Formula 1. The name refers to the most advanced and competitive of the FIA's racing formulae. It's a raw combination of speed, skill and that certain hint of daring. Journey back in time to the glory years of the 1960s. Marvel at the vintage cars, big-name champions and heart-stopping victories. All the big names are here: Jim Clark, Jacky Ickx, Jack Brabham--just to name a few. With Schlegelmich's compelling photographs, this exceptional volume takes fans so close they can almost smell the burning rubber and hear the engines roar! Rainer W. Schlegelmilch has been a motor sprots photographer since 1962. His expert lens has covered all the great names in racing. His unique style captures the drama of this action-charged sport.

Rainer W. Schlegelmilch *1941, Suhl, Germany Rainer W. Schlegelmilch goes to school in Frankfurt and graduates in 1960. His first car race is the 1000km Nürburgring 1962, where he portrays the racers for the final exam at the Bavarian State School of Photography in Munich. 18 months later, he opened his studio for photo design in Frankfurt - but the "Autobazillus" has already packed him and in addition to his advertising photography, he visited the Grand Prix of Formula 1, Le Mans, Targa Florio and many others - from the beginning photographed "RWS" for well-known publications such as auto motor und sport, Powerslide, ADAC Motorwelt, Sports Car Graphic, Car & Driver as well as Road & Track, Auto Revue and AutoBild, until around 1970 exclusively in black and white. From 1970 he devoted himself to color photography, and his pictures are appearing more and more frequently in calendars and books. Big companies such as Philip Morris, Mobil, Shell, Champion, Mercedes and BMW use his shots and the typical "zoom shots" as a visual purchase incentive for their products. More and more Schlegelmilch concentrates on the World Championship races of Formula 1 and owns with about 350,000 color photographs and 15,000 black and white images one of the largest archives in the Grand Prix scene. In 1997, RWS received support from his son Boris, who has since accompanied Rainer to the European Grand Prix with the camera and takes care of the digital and administrative matters as well as the website. Rainer W. Schlegelmilch is editor of many illustrated books about Formula 1 ("Grand Prix - Fascination Formula 1", "Portraits of the 60s", "Grand Prix de Monaco", "McLaren Formula 1", "Ferrari Formula 1", "The entire world of Formula 1 - 1950 to today ") and about car brands (" Mercedes "," BMW ", Aston Martin", "Ferrari", "English sports car", "Porsche"). A comprehensive online archive of all models of these makes is under construction. Highest quality standards set his limited edition "The Great Challenge", which includes his work for over 40 years. It is divided into five volumes of the great driver-era: Clark, Stewart, Lauda, ​​Senna and Schumacher. Its regular customers include glossy magazines, book publishers and advertising agencies as well as the marketing departments of the industry, such as BMW and Red Bull.      ... mehr

Rainer W. Schlegelmilch - Racing fever January 20, 2012 - March 31, 2012 Rainer W. Schlegelmilch saw his first race in 1962, when he recorded a series of portraits in the 100km race at the Nürburgring for his exam at the then "Bayerische Staatslehranstalt für Photographie" in Munich. 18 months later, he opened his own studio for photo design in Frankfurt. Racing has always been an important aspect of his work. Schlegelmilch has photographed numerous prestigious motorsport publications since the beginning of his career. From 1974, he focused entirely on Formula One. From the 90s to the present day, he has published more than 20 illustrated books, which earned him the praise of critics worldwide. His photo archive contains a total of 15,000 black and white negatives and over 400,000 color slides and digital images. For the Leica Gallery Frankfurt, it is a special honor to be able to present the treasures that Rainer W. Schlegelmilch has collected over all these years.... mehr