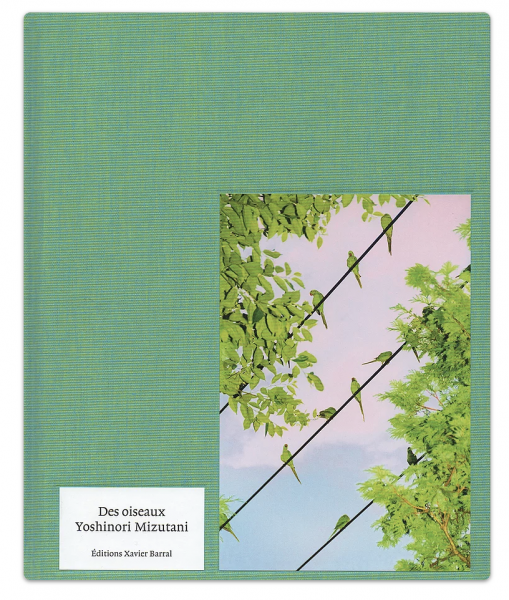 Do you have any questions concerning this product?
Description
Description
Japanese photographer Yoshinori Muzutani (b. 1987) has turned Tokyo's sky into the canvas of his... more
Close menu
Product information "Yoshinori Mizutani "Des Oiseaux""

Japanese photographer Yoshinori Muzutani (b. 1987) has turned Tokyo's sky into the canvas of his colorful universe. Turning his lens skywards, he captures crows, sparrows, and the many passerines that colonize electrical cables and populate en masse the trees of the megalopolis. The tender, pure blue of the morning skies gives way to the cyan and deep purple produced by the city's artificial and neon lights. Drawing deeply on Japanese pictorial tradition, Mizutani plays with power and contrast using vibrant and muted colors. Bedecked with bright yellow and gree feathers and orangey-red beaks, parakeets and starlings stand out against electric pink skies or among the bronze leaves of gingko trees. Having escaped the domestic space, the rose-ringed parakeet adds a certain touch of surrealism to the Tokyo sky.

Perfectly aligned in tight rows on electrical cables or perched next to each other, almost replacing the trees' foliage, the birds become armies, regimented colonies. The graphic lines they form redraw the urban space. Like dreams or hallucinations, Mizutani's birds saturate the city with their presence and restore part of its mystery. Tight framing and vivid colors give these images a certain strangeness. Using forms, textures, planes, and colored nuances, the photographer creates a visual vocabulary that is both poetic and pop, on the edge of the fantastical.