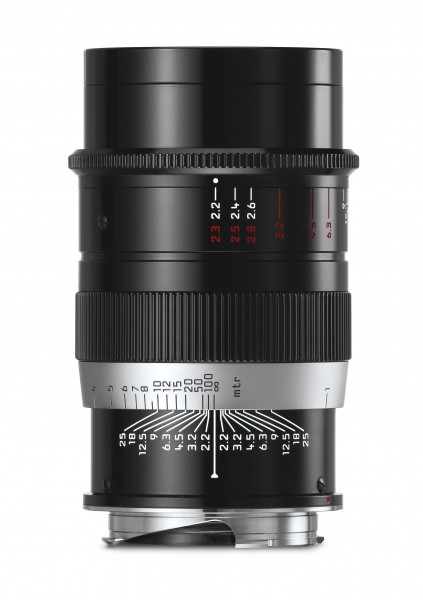 Do you have any questions concerning this product?
Description
Description
Blinded by Beauty Following the re-issue of the Summaron-M 28 f/5.6, Leica are now further... more
Close menu
Product information "LEICA THAMBAR-M 2,2/90 mm, black"

Following the re-issue of the Summaron-M 28 f/5.6, Leica are now further expanding their line of classic lenses with the Thambar-M 90 f/2.2. Once again, the exterior design has been carefully modified, while the optical calculations remain unchanged.

When the Thambar was originally released in 1935, Leica lenses were already renowned for their exceptionally sharp rendition. So it was all the more surprising when Leitz introduced a soft focus lens which – despite being named after the Greek term ‘thambo’, meaning ‘blurred’ – gave rise to images whose romantic aesthetics are not only unmatched by any other lens to this day, but also impossible to replicate in digital post-processing.

This makes the new Thambar-M an exciting counterpoint to Leica’s other 90mm focal length lenses, and allows the modern-day photographer to experience the unique characteristics of this classic lens; or, as the Greek would say, ‘me thambose me teen omorfia tis’: to be blinded by beauty.

Manufactured by Leitz from 1935, the Thambar 9cm f/2.2 achieved a relatively low production quantity of just 2,984 units, which partly explains its great popularity among collectors.

When developing the Thambar, the engineers surrounding Max Berek were able to draw on their vast expertise regarding the causes and correction of optical flaws, in order to design an intrinsically sharp lens which nevertheless permitted a carefully determined level of spherical aberrations – thus giving rise to the desired soft-focus effect. When the Thambar was first launched more than eighty years ago, it was intended for photography enthusiasts who were highly skilled at their craft.

Today, the ability to adjust images in the camera’s Live View monitor makes it much easier to achieve the desired results with this truly exceptional lens.

The Thambar’s distinctive, dreamily romantic look and unmistakeable bokeh are created by deliberately undercorrected spherical aberration, along with 20 aperture blades for the circular rendition of out-of-focus highlights. Because the aberration increases towards the periphery of the optical system, both the extension of the depth of field and the degree of diffusion can be precisely controlled via the stepless aperture ring.

Widening the aperture increases the soft focus, whereas stopping down reduces the effect.  The lightproof area at the centre of the soft focus spot filter prevents the axial rays (which generate sharp focus) from reaching the sensor – resulting in an even more intense soft focus appearance.