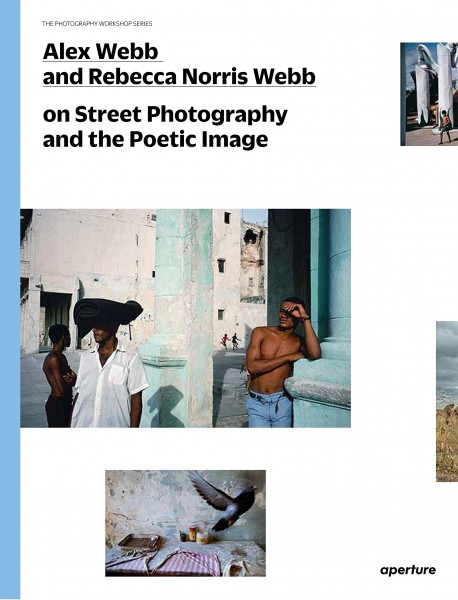 Do you have any questions concerning this product?
Description Neues 2
Description
In this series, Aperture Foundation works with the world's top photographers to distill their... more
Close menu
Product information "Alex Webb and Rebecca Norris Webb "On Street Photography and the Poetic Image""

In this series, Aperture Foundation works with the world's top photographers to distill their creative approaches, teachings, and insights on photography--offering the workshop experience in a book. Its goal is to inspire photographers of all levels who wish to improve their work, as well as readers interested in deepening their understanding of the art of photography. Each volume is introduced by a well-known student of the featured photographer. In this book, internationally acclaimed color photographers Alex Webb and Rebecca Norris Webb, offer their expert insight into street photography and the poetic image. Through words and photographs--their own and others'--they invite the reader into the heart of their artistic processes. They share their thoughts about a wide range of practical and philosophical issues, from questions about seeing and being in the world with a camera, to how to shape a complete body of work in a way that's both structured and intuitive.
Alex Webb (born 1952) is best known for his vibrant and complex color photography, often made in Latin America and the Caribbean. He has published eleven books, including "Violet Isle: A Duet of Photographs from Cuba" (with Rebecca Norris Webb) and "The Suffering of Light," a collection of 30 years of his color work. Alex became a full member of Magnum Photos in 1979. His work has been shown widely, including at the Metropolitan Museum of Art and the Whitney Museum of American Art, New York, and at the High Museum of Art, Atlanta. He has received numerous awards, including a Guggenheim Fellowship in 2007. His work has appeared in the "New York Times Magazine," "National Geographic" and "GEO," among other publications.
Rebecca Norris Webb (born 1956), originally a poet, has published three photography books that explore the complicated relationship between people and the natural world: "The Glass Between Us," "Violet Isle: A Duet of Photographs from Cuba" (with Alex Webb) and "My Dakota." Her fourth book, "Memory City" (with Alex Webb), is a meditation on film, time and the city of Rochester, New York, in what may be the last days of film as we know it. Her work has been exhibited internationally, including at the Museum of Fine Arts, Boston; George Eastman House, Rochester, New York; Ricco/Maresca Gallery, New York; and Robert Klein Gallery, Boston. Her work has appeared in the "New Yorker," "Time," "National Geographic" and "Le Monde Magazine."
Teju Cole was born in the United States to Nigerian parents and raised in Nigeria. He is the author of two works of fiction: "Every Day Is for the Thief," a novella, and the novel "Open City," which won the PEN/Hemingway Award and the Internationaler Literaturpreis. Cole, a contributor to "The New York Times," the "New Yorker" and other publications, is also an art historian and a photographer.

Customers also viewed
Customers also viewed
Henri Cartier-Bresson "Scrapbook"
€65.00
Saul Leiter "Retrospektive"
€49.90
Viewed
This website uses cookies, which are necessary for the technical operation of the website and are always set. Other cookies, which increase the usability of this website, serve for direct advertising or simplify interaction with other websites and social networks, will only be used with your consent.
Decline Configure