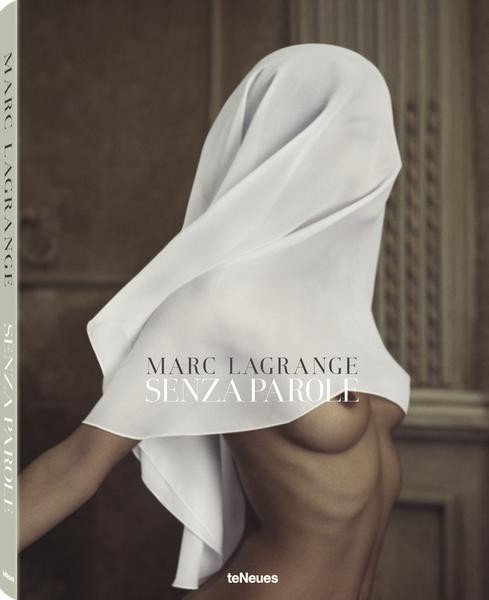 Do you have any questions concerning this product?
Description Neues 3
Description
It takes enviable skill and dedication to achieve mastery in the arts. Yet even more remarkable... more
Close menu
Product information "Marc Lagrange "Senza Parole""

It takes enviable skill and dedication to achieve mastery in the arts. Yet even more remarkable is the artist who widens his scope to venture beyond his already widely acclaimed signature style. Few would dare to even consider such a risk… However, in Senza Parole, Marc Lagrange is audacious enough to make that thrilling leap as he boldly showcases a broad array of distinctive approaches—everything from starkly straight nude studies to Lagrange’s more typically intricate and exotic compositions. The photographer’s devoted followers will still find the dream-like eroticism he is known for, yet, in this work, each photograph is one of a kind, with Lagrange’s hallmark of technical perfection. As one would expect from Lagrange, each tableau is carefully configured with not a single detail left to chance

Marc Lagrange's fascination with sculpture led him to seek out settings that somehow embody the sculptural arts. For this oeuvre he travelled to Pietrasanta (Italy), which has long enjoyed the patronage of artists, due to the region's fine marble, which has been treasured since the days of Michelangelo. Staying closer to home, the iconic "Handelsbeurs" in Antwerp (Belgium) was an irresistible temptation: an architectural marvel if ever there was one. Last visit was Paris, where an artist's loft filled with baroque decadence created the perfect atmosphere for a Fellini inspired shoot.

MARC LAGRANGE has developed a reputation for his opulent and timeless settings—a world where sensuality and seduction both play key parts. It is desire rather than its fulfillment that fascinated Lagrange. Not surprisingly, his otherworldly images have met with critical acclaim, being collected and exhibited in all corners of the globe. Lagrange’s previous publications include teNeues’s highly successful, Diamonds and Pearls.

GALLERY ARTISTS Stephan Morgenstern *1951, Bautzen, Germany Stephan Morgenstern pays attention to every detail, interested and devoted. "I've always looked. All my life. Just curious," he says succinctly. He doesn't attract much attention about himself and his profession, but pretty strong images. Emotional snapshots that tell stories at a glance - of people, countries, living conditions that shape and authentically reflect contemporary history. more René Groebli *October 9, 1927, Zurich, Switzerland René Groebli (born in Zurich, Switzerland in 1927) secured his place among the elite of Swiss post-war photographers with his 1949 portfolio MAGIE DER SCHIENE (RAIL MAGIC). In the early fifties Groebli worked as reporter for Life, Picture Post and other international magazines. During the following years he owned a studio for industrial and advertising photography. In 1957 the American more Alan Schaller *1988, England Alan Schaller is a London based photographer who specialises in black and white photography. His work is often abstract and incorporates surrealism, geometry, high contrast and the realities and diversities of human life. Publications who have featured his work include The Guardian, The New York Times T Magazine, The Washington Post, The Financial Times, South China Morning Post, Time Out and The more Alex Webb *Mai 5, 1952, San Francisco, USA Alex Webb became interested in photography during his high school years and attended the Apeiron Workshops in Millerton, New York, in 1972. He majored in history and literature at Harvard University, at the same time studying photography at the Carpenter Center for the Visual Arts. In 1974 he began working as a professional photojournalist and he joined Magnum Photos as an associate member in more Bruno Barbey *1941, Morocco Bruno Barbey, born in Morocco, has dual nationality, French and Swiss. He studied photography and graphic arts at the École des Arts et Métiers in Vevey, Switzerland. In 1961-1964 he photographed the Italians, perceiving them as protagonists of a 'theatrical world', with the aim of capturing the spirit of a nation. Bruno Barbey began his relationship with Magnum Photos in 1964. He more Craig Semetko *1961, Detroit, USA Craig Semetko is an American photographer focusing on authentic human experience. Born and raised near Detroit, Michigan, Semetko became a professional comedy writer and performer after college and years later discovered photography as another means of storytelling. His comedic background has given him a highly developed sense of the absurd and ironic, resulting in a strong theme of humor more Dieter Blum *January 6, 1936, Eßlingen, Germany Dieter has been working as a freelance photographer in culture and reportage since 1964, among others for magazines such as Der Spiegel, Stern, Time and Vanity Fair. He lives and works in Düsseldorf.At the beginning of the 80s he photographed the Berliner Philharmoniker under conductor Herbert von Karajan. Since then, he has devoted a great deal of his work to music, dance and art. In more Edward Quinn *February 20, 1920, Dublin, Ireland | †January 30, 1997, Altendorf, Switzerland Edward Quinn, who grew up in Ireland, practiced in various professions after school. Neither the partial monotonous work as a metal worker, nor the creative musician seemed to please him. He worked as a radionavigator for airlines before he discovered his heart for photography in the 1950s.In the Irish Independent, he published his first photo in 1950 showing an Irish horse winning a horse race in more Elliott Erwitt *July 26, 1928, Paris, France As a child of Russian immigrants, Elliott Erwitt spent his childhood in Milan until the family returned to Paris for a short time and emigrated to the USA in 1939.Erwitt worked for a long time in a photo lab, before he started shooting and experimenting at Los Angeles City College. It was not long before the young teenager moved to New York in 1948. There he met Edward Steichen, Robert Capa and more Emanuele Scorcelletti *December 27, 1964, Luxemburg Born in Luxembourg in 1964, Emanuele Scorcelletti, with Italian roots, lives in Paris today. At the age of 6, he got his first camera by his mother and discovered his passion for photography. He studied at the National Institute of Photography and Cinematography in Brussels. Between 1989 and 2009 he had a contract with the agency "Gamma" in Paris and still works as a freelance more 1 von 4... mehr

Marc Lagrange *1957, Kinshasa, Kongo | †December 25, 2015, Teneriffa, Spain Marc Lagrange's career took him from technology to photography and his creativity from fashion to art. His huge Polaroids, which have been exhibited worldwide, are a powerful example of his craft as well as his attention to detail: it shows the texture of the skin and the natural curves of its models that are highlighted. Lagrange works out entire sets until he finds the exact mood he wants to convey, with the goal of creating the images he wants. From the color of the walls to the shape of a chair, every single detail counts, underscoring Lagrange's perfectionism and willingness to unfold narratives. During his career, Lagrange photographed the same women over various periods of time and transformed them into his muses. Inge Van Bruystegem - a striking model and talented dancer - is one of them. Lagrange has been working with her for more than fifteen years, developing a privileged relationship. The trust that arises between them over the years is very rare in photography and still produces surprising results. Individuals posing in front of the Lagrange lens show more about themselves than they might have intended. In 2012, Delvaux - the oldest luxury leather goods house in the world - commissioned Lagrange with portraits of women from different generations, who portray their relationship with their handbags. In 2014, Lagrange traveled to New York to shoot icons such as Carmen Dell'Orefice and Zani Gugelmann. There he met some of Manhattan's most stylish and influential women. The series was referred to as Timeless Beauties and subsequent trips to China, Japan and other important destinations were organized for Delvaux. Since 2008, Lagrange has also developed his video work, including a movie for the fashion brand Supertrash's Duftstart. In 2012 he also filmed Liesa Van der Aas clip for Louisa's Bolero. Marc Lagrange's work has been awarded several exhibitions in Europe and the United States. In 2011, Maison Lagrange presented more than 240 works of art to the public, many of which have not been seen so far. The retrospective lasted six months. In 2013, his photo book "Diamonds and Pearls" was published by TeNeues in 80 countries. The following year, in 2014, he published "Hotel Maritime" - Room 58, a private edition of 300 copies, the contents of which were shown internationally. The atmosphere of Hotel Maritime - Room 58 is reminiscent of the most soulful and seductive paintings by Edward Hopper. More conceptual than his earlier work, it underlines the descriptive quality of his art.      ... mehr

Marc Lagrange - Diamonds and Pearls October 10, 2013 - December 31, 2013 He is probably one of the most famous and original nude photographers in the world. Antwerp-based Marc Lagrange stages timeless, erotic photography. His models are protagonists of a luxurious, mystical and simultaneously sensual arrangement. They slip into characters who translate Lagrange's cinematic visions. The photos combine classic glamor with the atmosphere of old master paintings. An important prerequisite for Lagrange is the chemistry between his models and him. On the basis of mutual trust and free from inhibitions, it is well known that the best recordings succeed in creating a harmonious result. Even though everything seems to be bared in the pictures, the models exude an incredible charm, which makes them all the more attractive. Lagrange is a master of detail; his complex compositions, paired with technical affinity, underscore his perfectionism. Often he looks for the right interior to construct the set according to his ideas. Only then it's an exact implementation of his fantasies. Known for his large-format Polaroids, the Belgian photographer loves structure, texture and a suggestive feel, which gets deeper expression through the penchant for size. In addition to a number of solo exhibitions worldwide, his work in the art and photography market is highly valued and represented in numerous collections. His highly successful books are on sale in over 80 countries.... mehr