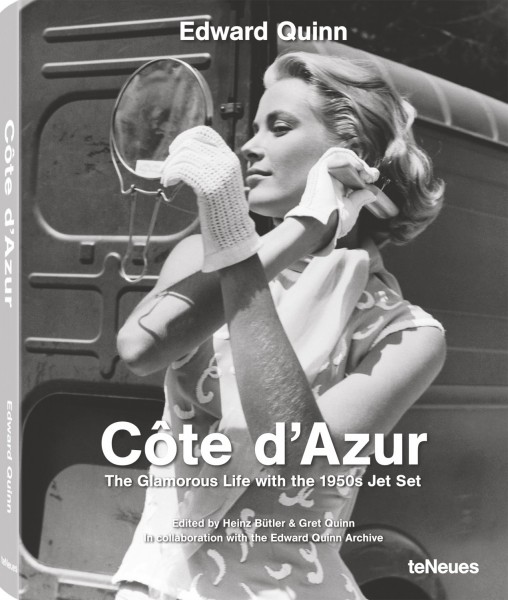 Finally back in print: Edward Quinn’s wonderful collection of 1950s stars and starlets on the French Riviera

No other photographer documented the societal and cultural life on the Côte d’Azur of the Golden Fifties so thoroughly, wide awake and with such a fine sense of irony as the Irishman Edward Quinn (1920-1997). In Quinn’s time, protagonists on the French Riviera are film stars and artists, jazz musicians, chansonniers, the aristocracy, shipping magnates, film directors, politicans, pin-up girls and the literati. Edward Quinn moves about freely with artfulness and charm in this glitz-and-glamour world and his view of it is unmistakable. Quinn does not compromise his subjects and time and again allows the observer to anticipate the private side: a young and equally unknown Brigitte Bardot, Aristotle Onassis and Maria Callas leaving a night club, Grace Kelly and Prince Rainier at their first meeting, Audrey Hepburn at the beginning of her career, Sophia Loren in her hotel suite. In a comparable measure, Pablo Picasso allowed no other photographer the same access to his private life as to his longtime friend Eward Quinn. Enjoy this delightful, photographic cocktail of individual eloquence.

Edward Quinn *February 20, 1920, Dublin, Ireland | †January 30, 1997, Altendorf, Switzerland Edward Quinn, who grew up in Ireland, practiced in various professions after school. Neither the partial monotonous work as a metal worker, nor the creative musician seemed to please him. He worked as a radionavigator for airlines before he discovered his heart for photography in the 1950s. In the Irish Independent, he published his first photo in 1950 showing an Irish horse winning a horse race in Nice. For the next few years, the French Riviera remained a food point and its favorite motif. Here celebrities and the high society frolicked. With his charming, friendly manner he gained confidence in the often unapproachable personalities. His recordings portray a glamorous and cheerful society, which after the years of the war is free and undisputed. Often it is the quite informal moments, which Quinn skillfully sets in scene and thus not necessarily the star, but the man offsets. Quinn was never the paparazzi photographer, but rather interested in the artistic talent he felt connected to. In 1951 he met Pablo Picasso, to whom he used a long and close friendship. Many of the most important portraits of Picasso come from Edward Quinn's hand. He published a total of four books and filmed three films about his longtime friend Picasso. At the beginning of the 1990s Quinn left the French Riviera to move to Switzerland to the family of his wife Gret Sulser, who was born in Zurich (married 1952). A few years later, he died at the age of 77.  ... mehr