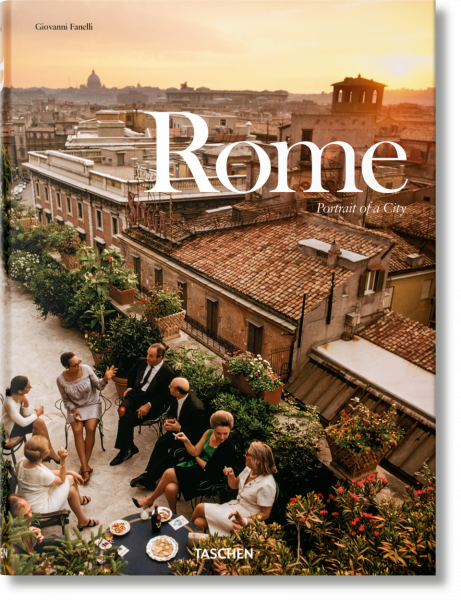 Do you have any questions concerning this product?
Description
Description
’’The eternal city’’ –Tibull Rome is known for many reasons: the vatican city, the endless... more
Close menu
Product information "Rome.Portrait of a city."

Rome is known for many reasons: the vatican city, the endless number of churches, the art, the food, the architecture, ... .

Go on a discovery tour trough Rome and see the beauty of symbols like the trevi-fountain, the St. Peters’s Basilica or the Sistine Chapel, see the beauty of the idea of ’’ La dolce vita’’ in the capital city of Italy.

Artists like Giacomo Caneva, Pompeo Molins, Giuseppe Primoli, Alfred Eisenstaedt, Carlo Bavagnoli, Henri Cartier-Bresson, Pasquale De Antonis, Peter Lindbergh, Slim Aarons and William Klein are represented in this book which shows Rome from every side: as the political stage of Italy or the perfect setting for movies and fashion.

Some oft he pictures taken from long-established archives and show rare historical pictures from the time of the Grand Tour. Follow the city’s development recorded in photographs from nearly uninhabited places in the city to the status of a metropole with nearly three million inhabitants.

The story is told in about 500 photographies in sepia, black-and-white and colour.

Similar products Customers also viewed
Similar products
London. Porträt einer Stadt
€50.00
Customers also viewed
Viewed
This website uses cookies, which are necessary for the technical operation of the website and are always set. Other cookies, which increase the usability of this website, serve for direct advertising or simplify interaction with other websites and social networks, will only be used with your consent.
Decline Configure